Our Waldorf in all it's Waldorfian Glory....

So it's been a while since the last post, way too much was going on at the one time between work and the house and there was no way I could sit for more than ten minutes to get my thoughts in order and blog :)

So a bit of a recap on the last 5 weeks escapades.

We had PCI booked on the 18th of October.  For something that we thought we'd just breeze through we were there for 3.5 hours!  R and I had been pretty much onto every detail on the house but when it comes time to go over the place from head to toe we didn't think it would be that long!

Our SS was really great and encouraged us to be very picky on things, such as:
- paint cutting in
- the "dags" that run from the paint around windows
- the paint on the window frames themselves
- the eveness of the paint on the walls
- doors rubbing against carpets when opened
- the gaps around windows and bricks if they are quite obvious (I would recommend speaking to your SS about fitting quad around the windows as it gives it a nice finish.  Our SS took the liberty of doing this and it really frames the windows well,
- paint finish on doors (check for smoothness, there should be no rough, gritty feel on it)
- tiling (we had some that were cut short which I requested be repaired immediately (I am a tilers daughter after all :)).
- cornicing should not be rough
- siliconing on splashback
- kickboards should not have chips

Majority of the items we picked up were paint or plaster related. So after being advised that he will have everything squared away in the week, our SS booked handover for the 26th.

Handover day was met with a lot of anticipation, nervousness and definitely impatience! Our scheduled 10am handover was pushed closer to midday as our SS wanted the place to be pristine for handover. That is one thing that can be said, our SS takes great pride in his work.

We walked through and compared the PCI forms that we had signed off on the week prior to the work that had been done and found most of it had been completed.  There was just the tile that needed to be replaced in the Galley that was short (which the tiler came by the evening to do - and it was a different shade of white!)

Although the commercial cleaners had come through, I still had to give the place a good scour to get rid of that dusty feel.

I had taken the wednesday to friday off before the Cup weekend so had a good solid three days after handover to cart some things over and then we did the massive furniture move the Sunday.  This was probably the first Cup Weekend where I didn't have a bet on the horses, was way too busy unpacking!

We've settled in well.  It still feels surreal that I am actually sitting in the living room typing this when it was only a building site a month ago! Loving our place. It's great to be back in the old neighbourhood too.

We still have a way to go in terms of decorating.  Because the house was finished earlier than we expected, the timings for our couches are out by a couple of weeks.  So using my mum's furniture from her old place for the time being.

Not particularly our taste (no offence mum!) but it will make do for now and I am sure our back pockets won't complain either.

We decided we will do the projects by it's urgency.  Blinds and driveway are being finalised after comparing quotes. (Anyone use Kreative Design? I left a message for them over a week ago and no return call...not good if they are part of the PD rewards program that they don't even call back people giving them business?!?)

As we elected to not have the shelving in the pantry, storeroom and our WIR done, we have to also get this fitted with our preferences.

I always imagined the dry pantry to be like a little utility room, where I can go for all my dry ingredients without having to lug it all out and take up bench space in the kitchen.  So our first weekend project was Project Pantry.

Ikea and I have become fast friends (much to Rob's disgust :P) and I love the Expedit and Lack range for the chunkiness of the shelves and units but it's functionality and look.

So, R and I transformed the cell like space of the dry pantry into a full functioning storage space for all the Tupperware that we have accumulated over the years! Just have to finish the kickboards and add a few baskets but it's come up a treat!

When we asked about when PCI is expected to be, SS communicated inspection 5th, so we thought yeah PCI! Buhbow...it's actually a building inspection.  The PCI is booked in for the 26th.  SO more waiting, waiting, waiting...

Went around this weekend and there's still a bit to do though:

- theatre door needs replacing
- painting of the void area by the stairs and dwarf wall
- repainting/patch painting of the areas that were needing to be rectified that didn't pass last inspection (i.e. cornicing, areas around windows or doors)
- bathtub needs to be installed
- plumbing in laundry needs rectifying.  It was plumbed to the left (if facing the trough) however we switched the washing machine space to be on the right side where the washing machine taps are....guh derr freddy!!!
- downpipes to be connected to stormwater
- shelving needs to be installed in cloakroom and wardrobes
- door handle to be installed on front door
- cupboard handles to be installed on those cupboards replaced because of error last month
- staining to be completed on stairs
- bulkhead above appliance tower needs to be completed
- tiling needs to be finished off around the kitchen island (as the correct cupboards have now been installed) and the bath hob and the splashback in the powder room needs to be rectified as installed incorrectly.
- tiling on balcony and terrace to be completed
- garage doors to be installed
- Modwood privacy screen on terrace to be installed
- carpets to be installed
- mirrors to be installed in all ensuites
- Showerscreens to be finished off (doors just need to be attached)
- Master ensuite window needs fixing as frame has come away from glass.
- misalignment of front door to be fixed up.  There is a noticeable gap towards the bottom of our door if you are inside looking out where you can see that the bottom part of the frame is bowed.


All the brick sills that weren't to standard have been replaced and they look heaps better.  The windows in the dining room and two awning windows that weren't square have been fixed up too so now it's not so noticable that they were out of line.

Here's pics of our kitchen splashback, which has come up just as i imagined.  Loving it! 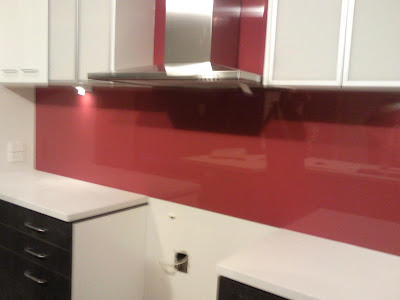 How extremely exciting is it to see all those selections you picked nearly a year ago and had visions of in your head come to life.  Today Rob and I giggled like little kids in a candy shop to see our home so close to the finish line, with our PCI booked in for the 5th October!

And to think that all of this has happened in less than 25 weeks of build time (our site start date was 30/3/11 but the site cut etc didn't happen until late April)!

Way to go PD!  We received our final invoice (dated 30 sept) so i reckon they will give us this week to organise the final things like transferring water and electricity into our names, organise the final direct debit from our lender, etc.

Anyway, since our last visit on the 10th so much has been done.

- Most of the floor and wall tiles have been laid (just have to finish the batch hob and patches around the kitchen island) And also will have to fix up the splashback in the powder room as they laid the wrong tiles.  It should have been all feature tile but they laid it like the upstairs ensuite.
- Most of the faucets have been installed (plumber needs to just finish off the mixer taps in the master ensuite, install taps in the powder room and ensuite vanities)
- Spa bath needs to be installed :(
- The electricals have been finished off and all the lightswitches are installed.  Have to just go over the electrical plans to make sure nothing missing.
- Brickwork that needs replacing still to be done
- Paint patch ups required as they have come back to fix up the non flush items, such as windows and architraves.
- Carpet to be installed (approximately the 26th of September)
- Main door handle needs to be installed.

Here are some photos of our progress so far!

Popped around this weekend to have a looksee at any progress on the house and to take my Granddad to see it.  Poor Pa has listened endlessly to Rob, mum and myself talk about the place but he hasn't even seen it!  He was a carpenter back in the day so it was good to hear that he thought the craftsmanship was good :)

The portico has been rendered and down pipes have been installed.

Here is an updated pic of our facade! 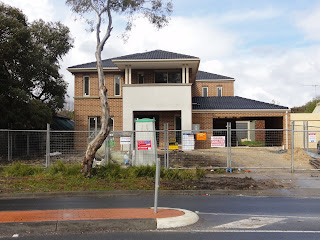 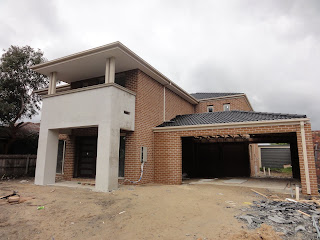 Been a while between blogs but there has been so much progress!!!  I have not gone around to the house for two reasons, 1. workload has increased which has taken a lot out of me at the end of the day and 2. i just wanna be in already and get impatient when i go onsite so best visit on the weekends so i can have a good surprise :)

Okay so fixing stage is now complete.  Our walls are beautifully painted (bar the wall along the stair (?)), internal doors have been painted and hung (there is the mystery of the disappearing theatre door of which i will explain later :P), stairs are installed, all cabinetry has been installed, waterproofing of the wet areas is complete, kitchen installed (with two errors which are in the process of being rectified), bifolds, laundry and front door stained (english walnut), skirting boards and architraves installed, tiles have been delivered and carpets are expected to be in on the 26th September.  It's near the finish line!

Back to the issue of the mystery door - about mid August we had delivery of all the internal doors.  Amongst them was our feature door for the theatre room, which is very simiilar to our laundry door shown below.  When i took the pics over the weekend, we saw a nice glossy flush panel attached to the door frame - no sign of the nice expensive corinthian door that should have been stained and hung there.  hhhmmmmm....Rob has spoken to our SS, just awaiting an update.

Also noticed the boxes for the dishwasher and cooker around the rubbish cage but no sign of the equipment.  They must deliver them there, unwrap and store elsewhere? Just seems wierd why they would unbox the units though...again, wierd. 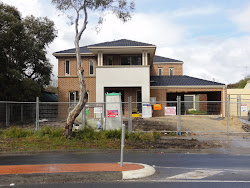 Booking your room at the Waldorf??

Got a build question you need answered? Ask the Magic 8 ball!! :)

MelNRob
MelNRob are a couple in their 30's on the journey to building our dream home in the Eastern Suburbs for us and our 2 four legged friends, Sam and Ollie. Along for the ride will be Mel's mum (longterm or shortterm undetermined at this stage, but if she sticks around we'll have a live in nanny?) hahaha!

Ensuite 2. 3 and 4 Colour and Selections